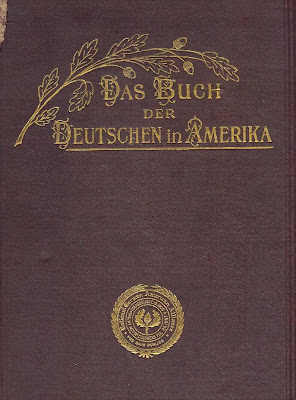 I'm always finding new things online. It's not that the book itself is new. In fact, it's been around for exactly one hundred years. What's new is that significant portions of it are now available online in English translation.

'The Book of the Germans in America' was published in 1909. It contains more than nine hundred pages and, starting around page 368 or so, the latter portion of the book is about particular Germans who either emigrated to America or spent enough time in America to have written and published poems regarded as a literary contribution to the German-American experience.

Things changed rapidly in the following decade, largely due to American participation in WWI, when laws took hold requiring schools in German-American communities to use English as their primary language of instruction. Consequently, the book pictured above never really found a place in the public school curriculum.

If you open the text to page 368 by clicking on this link you'll see the first four pages of a fifty page essay called 'German Poetry in the United States' written by a woman named L.L. Leser of Philadelphia, but you won't actually see that essay until after you've scrolled past the photo of Konrad Krez. The original text is all in German. The online edition includes page by page translations of much of the text. Short biographies are provided for a few dozen of the more notable immigrant poets, along with representative samples of their work. The placement of the photo of Krez and the caption beneath it make a fairly compelling case for Konrad Krez as a leading light of German poetry in the United States at that time.

I mention the book here because I've recently translated three Krez poems. My translations are available exclusively on this blog. Links to the archived posts of my translations can be found at AATIA, the Austin Area Translators and Interpreters Association, in my blogroll or at this link.

The poems I translated were written during or shortly after the Civil War and published in 1875. They describe New Orleans before the fall of Mobile in 1865, Brazos Santiago at the mouth of the Rio Grande prior to the march on Brownsville in August, 1865, and the Union occupation of Little Rock from August, 1863, until the end of January, 1865. My great great grandfather died serving in the regiment Krez commanded, the 27th Wisconsin, a fact that I discovered researching my family history online in the past five years.
Posted by Craig at 2:01 AM 2 comments: 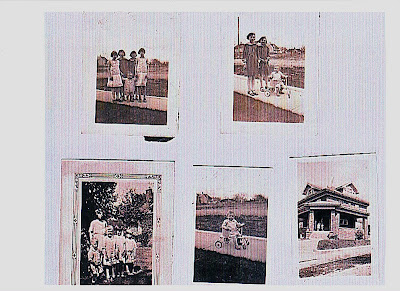 The pictures above were taken in Jefferson City in Wisconsin in 1930. They were sent to me by my Aunt Vera at my request shortly before she died a year or so ago at the age of 90. Vera is the girl at the left in the upper right picture. The girl to her left is her sister, Eileen, and the three year old driving the toy car is my father.

I would guess their mother, Elda, was the photographer, but it could just as easily have been their father, my grandfather. He was a minister for seventeen years and Jefferson City was the last pastorate where he was able to perform his duties. He suffered a respiratory collapse later that year and remained an invalid until his death in 1932. The house in the lower right picture appears to be the parsonage where the family lived at that time.

A few days ago I was looking on Ancestry.com at the 1930 Census for Jefferson City and I noticed something I hadn't seen before. The thing I had noticed previously was that the family's surname, Lubach, had been misspelled as Laubach, a perfectly understandable error on the part of the enumerator.

Frank Laubach had been a famous minister in that era, best known for his missionary work in the Philippines, where he had devised a system for teaching adult literacy. When the Spaniards ruled the Philippines as a colony, education had been a priority for only a few wealthy, elite families. The American colonial regime placed a strong emphasis on literacy and made sweeping changes to the educational curriculum, eliminating Spanish and replacing it with written English. School children in the Philippines were far more likely to progress rapidly in acquiring the English language if their illiterate parents didn't feel threatened by their children's proficiency with the colonizer's language. So adult literacy programs were the order of the day and that, along with unrestricted emigration to the U.S., made American colonizers and their exceptional military commitment to the Philippines very popular.

While I'm not certain if it's really a compliment to be confused by the government with someone famous, I did make a point of informing Ancestry.com that this family listed in Jefferson City in the census really is my father's family and the enumerator really did misspell the family surname. Searches on Ancestry.com now produce the same record in response to requests with either spelling.

That's what I noticed the first time I found the record, and believe me, the enumerator's spelling error, whether intentional or not, did not make finding the record any easier. The thing I noticed this time, though, is that the enumerator noted the name of the street for the households recorded in a vertical column along the far left margin of the page. So it's clear that the first four listings on the page were on the west side of Wilson Avenue, which ends where East Linden Street turns into East Linden Drive. The enumerator made a right turn at Linden Street and the remaining households on that page are all listed in the margin as located on that street. My guess is that all of the houses on East Linden were on the north side of the street because the Google map makes it clear that everything south of East Linden Street is on the Meadow Springs Country Club golf course, within easy walking distance of the clubhouse and the circular drive that provides access to the clubhouse.

In the pictures above there are some houses in the background. My guess is that the pictures were taken on or from the premises of the Meadow Springs Country Club. I did some Googling and determined that the course was built in 1920 and redesigned and remodeled around 1970. I also found a catalog of all of the architectural designs drawn up by Frank Lloyd Wright that were ever built. The catalog includes nearly 500 buildings, most of them private residential homes. One of them was built on East Linden Drive in 1950 on property opposite Meadow Springs Country Club.

I don't know if the parsonage on East Linden Street where my father and his family lived from 1928 until 1930 is still standing and in use. But I'm fairly sure the Frank Lloyd Wright house on that street is still there. I visited Jefferson City four years ago with my mother-in-law who is now 87 and still living in Milwaukee in the house that her husband built in 1950. I'll be visiting her again a few weeks from now as I understand she's starting to have some problems with her memory. The last time I visited Jefferson City with my mother-in-law we saw some churches and a few older homes that looked like they might have housed ministers. This time I'll know exactly where to look.
Posted by Craig at 9:11 AM 2 comments: