A Rose By Any Other Name

A year or so ago I found a webpage called the Archiv der Franckeschen Stiftungen zu Halle. I didn't know quite what to make of it at the time. But I did find it curious as there were several people listed with my surname. Those people are still listed there and, in point of fact, one more person with my surname has been added to the list.

If you click on the link you should get a long list of German surnames that start with the letter 'L'. My surname is near the bottom of the list, filed alphabetically. I won't bore you with the details of my personal concerns. The question is, what in the world is this list all about? A year ago I found it quite confusing. But the site has been updated a little in the interim and now every name on the list is a link to personal details about each of the names on the list. All of them were dead by the time America's constitution was ratified.

Halle is a city near Leipzig in the state of Saxony Anhalt, one of half a dozen or so new states established as part of the recently reunified Germany. It used to be part of East Germany and for almost half a century the information on that list would probably have been accessible to STAASI, the East German secret police.

If I had gone to East Germany when I finished graduate school during the last days of the Reagan era, someone in the state police there would probably have been obliged to consult this list. My surname is fairly unique. Simply by finding my surname on this list they would have known more about me than I know about myself.
Posted by Craig at 7:57 AM No comments:

A House On Baltic Avenue

The bad news is that my blog is valued at less than B$2,000.00. The good news is that some of the other Blogshares investors were so impressed by my business acumen that they have given me shares in three other blogs worth nearly B$9,000,000.00, so now I have the wherewithal to invest in other blogs.

If you think your blog might be a good investment, do let me know. I've got imaginary money to spend. Their link is at the bottom of my blogroll. I also signed up for Adsense, but so far they haven't found any ads that make sense for my blog.
Posted by Craig at 8:34 PM 2 comments:

I exhanged e-mails over the holidays with a third cousin once removed, a granddaughter of my great grandfather's sister. My cousin verified that she lived in the same house with her grandmother for a number of years up until her grandmother's death at age 77 in 1935, when she was twelve years old. She said that her grandmother's brother from Kewaskum came across the state of Wisconsin and stayed with her family in Chippewa county for a few days during the funeral. She didn't recall the name of her grandmother's brother, but that doesn't matter because I already know who it was that visited, but until now I couldn't prove it. It had to have been my great grandfather's step-brother, Ed or Edward Lubach.

When my great great grandfather died in the Civil War in 1865 he left behind a widow and three children. His widow remarried in 1867. Her new husband's youngest son, Edward, was then four years old. By 1880 all three of her children, Charles, William and Louise, had married and moved away. Edward and his parents, his father and his stepmother, remained in Sheboygan county, a few miles north of the town of Kewaskum, for the rest of their lives. Edward adopted the surname of his stepmother's first husband who had died in the war.

When I put together my family history webpage a year and a half ago I had a vague hunch that this could be the case. I viewed it as an interesting possiblilty, one worth exploring, but now I have no doubt whatsoever.
Posted by Craig at 6:30 PM 1 comment: 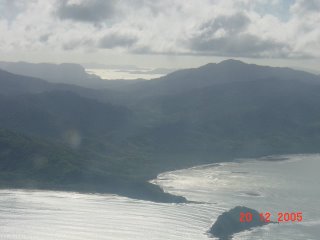 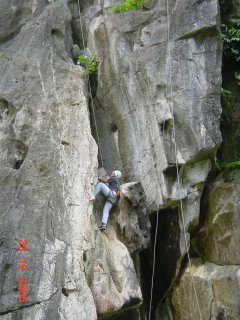 I spent at least part of my Christmas holiday thirty feet off the ground with my rear end in a sling.


My wife and I went to a resort in Palawan, one of the least developed provinces in the Philippines. The island is long and narrow, extending most of the way from Luzon to Borneo on the westernmost side of the archipelago.

The resort, El Nido, offered rock-climbing as one of its numerous diversions and naturally I couldn't resist. The picture was taken by one of my climbing guides, a 23 year old Filipina who was on the ground attached to the other end of my rope, patiently waiting for me to lose my grip. Somehow I managed to get back on the ground without doing any permanent damage to myself or the rock face. The painful part was hearing how impressed my guide was that someone my age, fifty-two, would attempt something so strenuous. Two or three days later I could nearly raise my right arm over my head.

Click on the pictures to see enlarged versions. I've got more if you'd like to see them.
Posted by Craig at 12:36 AM 2 comments: