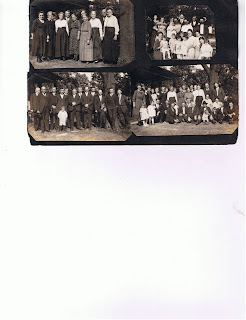 My third cousin, Kim in California, who I've only met online through my blog, has sent me more photos of our Price relatives from South Bend, Indiana. If you click on the photo you can see them in much greater detail. Kim said she thinks these four pictures were taken in 1927, roughly twenty-five years after the 1902 Price Family Reunion photo that appeared last year in a previous post.

The really great thing about the 1902 Reunion photo is that that picture has numbers on each of the individuals and names to go with the numbers on a separate page so it's fairly easy to identify almost all of the nearly fifty individuals in the photo. These four photos aren't numbered or coded, so to identify people you have to imagine how much different they would have looked twenty-five years later. Many of the adults in these photos were small children in 1902.

Kim asked me if I recognized any of the children in these photos. I can't really claim that I do, but I did point out to her that my mother was born in 1926 and her older brother was born in 1925. If you look carefully at the upper right photo, you'll see that it includes a woman standing in the middle row with a baby girl in her arms who looks to be perhaps a year old or a little less. Standing directly in front of that woman is a small boy who looks to be about two years old. I don't think Kim would have sent me this picture if she weren't fairly certain that the woman holding the baby was my grandmother, Carlie (Ruth) Steele. That would make the baby my mother, Carolyn, and her two year old brother my Uncle John.

The woman at the far left of the upper left photo was my great grandmother, Laura (Price) Steele, pictured with her six older sisters and three older brothers. The man at the far left of the lower left photo was my great grandfather, Ira Steele. I suspect that the man standing in the front row in that picture with a two year old boy in a sailor suit in front of him was my grandfather, Cleon Virgil Steele.

The three of them, Great Grandpa Ira, Grandpa Cleon and Uncle John, are sitting together in the front row in the photo on the lower right. Cleon is the one wearing the hat. I think Cleon is also the man on the far right in the upper right photo. Kim tells me that her mother and grandmother are also in these photos and that her mother was born the same year as my Uncle John.
Posted by Craig at 2:32 AM 23 comments: