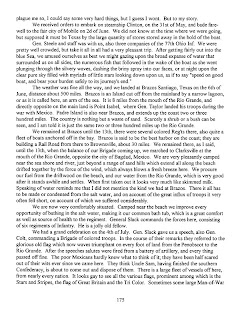 I exchanged e-mails a month ago with a direct descendant of the German-American poet-general, Konrad Krez, who organized and led the regiment in which my Civil War ancestor served. The first message arrived within a day or two of the records I requested from the National Archive. He had taken a look at my online translations of two Krez poems and the foreword by Ludwig Finckh that accompanied the volume of Krez poems published in Germany in 1937. His comments were quite encouraging, so I may try to do a few more translations in the future.

My great great grandfather's service record shows that he was first hospitalized on June 8, 1865 on the island of Brazos Santiago, just south of South Padre Island in Texas at the mouth of the Rio Grande. It's clear that Wilhelm Lubach made the trip on the Clinton with the rest of his unit on June 2, 1865, from Mobile to Brazos Santiago. The date of his hospitalization suggests that he fell ill on the ship as it occurred only two days after June 6, the date the ship arrived. It's not clear how long he stayed there or exactly when he was put on another ship and transferred up the Mississippi to the hospital at Jefferson Barracks in St. Louis, but I would guess it was within a week or two at most. The port there was a busy place at that time. The unit was moved upriver on the Rio Grande to the town of Clarksville on the 13th of June. One of the documents from Mark Knipping's book about the 27th Wisconsin Volunteer Infantry Regiment provides a fairly detailed account of the unit's arrival at Brazos Santiago. Click once on the text to enlarge it.

The account was written by the regiment's adjutant. My great great grandfather officially died of pneumonia and it appears in the records that he spent the last eight weeks of his life in a hospital bed. An e-mail from my aunt a year ago indicated that she thought he died of yellow fever, a mosquito borne disease similar in some respects to dengue or to malaria. The incubation period is about ten to twelve days. Swamps, such as those found around Mobile, are a likely place for contracting it and death from pneumonia is not unusual for those who don't rebound when the fever snaps. Treatment usually involves rehydration with an IV drip as the extended high fever often results in acute dehydration.

The only personal effect listed as returned to his widow was the army issued shirt he'd worn. Nearly fifty dollars was deducted from his pay for that shirt and whatever other items of clothing he was issued.
Posted by Craig at 10:32 PM No comments: 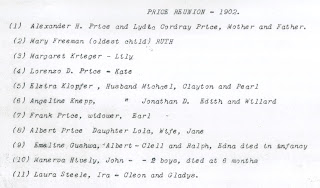 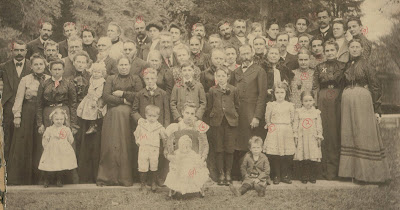 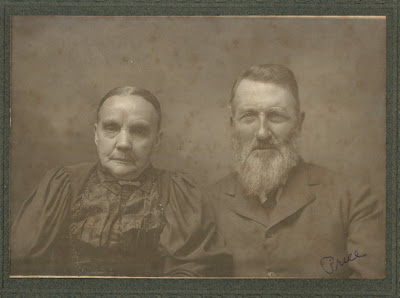 I heard from a third cousin, Kim in California, in response to a post I wrote in November headed Earl of Great Grandpa Price. I mentioned in that post that my mother had shown me a picture of my great grandmother, Laura Steele, and one of her sisters, Emma, and that in the picture it looked to her as though they might have been part Native American.

My cousin sent me these pictures of a Price family reunion and 50th wedding anniversary that took place in 1902 in North Liberty near South Bend, Indiana, my mother's hometown. She said that she thinks Emma does have features that could be Native American, but that their other sister, Angie, definitely looks Native American.

If you click on the reunion photo to enlarge it and slide to the upper right hand corner of the picture, you can see three of the seven Price sisters grouped around their brother, Frank. My great grandmother, Laura Price Steele, is in the back row to Frank's right. Her sister, Emma, is in the back row at the far right of the frame. Angie is the woman with the dark hair directly in front of Frank.

My cousin's great grandmother, Elsie or Elzira, is near the middle of the photo and one would never guess from her appearance that she also had Native American ancestry. If you look at the picture at the bottom of my great great grandparents, Alexander H. and Lydia Anne Cordray Price, it should be fairly easy to spot them near the middle of the group photograph. The occasion was their 50th wedding anniversary, attended by all ten of their children and their twelve grandchildren.

The young fellow standing in front in the sailor suit is my grandfather, Cleon Virgil Steele. He was three years old at the time. The man in the back row near the middle with his head tilted at a twenty degree angle is my great grandfather, Ira Steele. The man to his right is my cousin's great grandfather, Michael Klopfer.

Many thanks, Kim, for passing this along to me and for your permission to post it online.
Posted by Craig at 4:30 AM 11 comments: