Band of Brothers: The Lost Patrol

The news here in Manila over America's Memorial Day weekend is that two octogenarian veterans of the Japanese occupation of the Philippines during WWII may finally be ready to surrender. The soldiers, Yoshio Yamakawa, 87, and Tszuzuki Nakauchi, 85, apparently decided to remain on the island of Mindanao and take their chances in the jungle rather than return to Japan when the rest of the Japanese forces withdrew in 1945. Both men have been officially dead in Japan since shortly after the war.

Stories on the men were carried by MSNBC, A.P. and Reuters and attracted enough worldwide attention to bring a large international press contingent and some government officials from Japan to the southernmost island in the Philippines, but while rumors about the men abound, according to a Manila Bulletin story, neither of them has yet made a public appearance. Some officials are even calling the story a hoax.

The last officially recognized Japanese soldier found serving in the Philippines, General Hiroo Onoda, returned to Japan in 1974 after his former commanding officer told him officially and in person that the war was over. A large contingent of Japanese soldiers had occupied Mindanao during WWII, but the province has always been problematic as it lies close to parts of both Malaysia and Indonesia and roughly half of its population is Muslim. The Spanish and American colonial governments of the Philippines never really established complete control over Mindanao and the province has remained a hotbed of unrest since the Philippines became independent in 1946. Communist and Muslim separatist groups both have active guerrilla insurgencies in the jungles where the Japanese veterans are alleged to live. Some people speculate that there may have been as many as forty undischarged Japanese veterans living in the province.

I mention it here because living memory of WWII is now on the verge of fading to black, just as living memory of the Civil War in America did during the decade leading up to WWII.
Posted by Craig at 1:21 AM No comments:

One of the earliest posts on this blog concerns the outpost on the island of Brazos Santiago where I'm convinced that my great great grandfather was stationed when he fell ill. He was apparently sent from there across the Gulf of Mexico and up the Mississippi to the hospital at Jefferson Barracks in St. Louis where he died and was buried among the Civil War casualties on July 27, 1865, shortly before Jefferson Barracks became a National Cemetery.

I mention it again here because a few days ago I found a website put together by a descendant of another soldier who was stationed on Brazos Santiago and managed to survive the war. If you scroll a little more than midway through Al Shelton's Family Album you can see a nicely reproduced photo that features the wife and family of Miles Whitehall, a former slave from North Carolina whose Colored Infantry regiment served much of the two years of his enlistment on Brazos Santiago. Al Shelton's web page indicates that Miles Whitehall was 33 years old in 1864 when he enlisted and his absence from the family album suggests that he was no longer alive in 1910. If he had lived that long he would have been 81 years old. His family apparently collected a monthly disability or death benefit as the result of "scurvy" that he suffered from during and presumably after his enlistment. Much of the information Al has about his family comes from the paperwork filed in order to collect that pension.

My great great grandfather, Wilhelm Lubach, didn't survive the war, but it appears that his brother-in-law, August Heise, did. They both served in the 27th Wisconsin Volunteer Infantry Regiment. Pension records for Civil War veterans in Sheboygan County in 1883 show that August Heise was collecting ten dollars a month in disability compensation for the "chronic diarrhea" that no doubt served as a reminder of his Civil War adventure nearly twenty years earlier.
Posted by Craig at 1:38 AM 1 comment:

Height and Depth of Everything

A little more than two years ago on a Google search I came across a cemetery near Chippewa Falls, Wisconsin, that had been transcribed and posted online. Virtually everything I have been able to discover about my father's family in those two years has now been posted on this blog or on my website and none of it would have been possible without the online transcription of the Tilden Emanuel Cemetery where my great grandparents are buried. That cemetery was my point of departure, the solid lead I needed to find more leads and to confirm or verify other possibilities.

The person who transcribed that cemetery, Katherine Haake, is thanked and credited on my website for her effort. I also wrote a personal e-mail thanking her and I received a fairly prompt reply from her. She told me I could thank her by passing it forward, doing something with the information she had provided that might in turn be useful or helpful to someone else. I hope my website qualifies.

I didn't think to ask her who she was or why she might have been inspired to transcribe and post the Tilden cemetery. But I am fairly certain that she is the same Katherine Haake who is mentioned in a Rain Taxi review article written in 2002. I've read the review, but I haven't yet read her book, The Height and Depth of Everything. I plan to have a copy of it waiting for me in Seattle when I visit home a little more than a month from now.
Posted by Craig at 6:28 AM 3 comments: 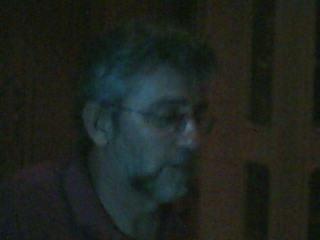 Me on my webcam.

I haven't been getting enough comments on my blog lately, so I've decided to do something a little more interactive this week. Two years ago I found a site for a cemetery with a listing for someone I thought might be my great great grandfather. A little more than a year ago I was able to confirm that that listing was in fact my great great grandfather. Nearly all of the research I have done has involved information from sites I was able to locate and access via the internet.

Prior to finding these digital records of my ancestors I knew who my grandparents were, but I had only the vaguest idea who their parents or grandparents were and I had very litle interest in learning anything more about them. Despite the alleged popularity of online genealogy, I suspect that most people don't really spend much time thinking about who their ancestors were and what they did or didn't do while they were alive here on planet earth.

So I've got a proposition to make. If you know the name of one of your great great grandparents and can tell me where exactly they are buried, leave a comment and let me know. It's alright, you can tell me. I won't go to the cemetery and dig them up. But if you have a blog I will visit your blog and add your blog to my blogroll.

If you don't know the names of any of your grandparents' ancestors and haven't a clue where they might have been buried, you can still leave a comment. Tell me why you think it is that you don't know. Was that information deliberately withheld from you? Were your parents or grandparents careless, inconsiderate or absent-minded? Or is there some other reason they might not have been able to pass that information along to you. Please let me know. If you do, I promise, I'll visit your blog and leave a comment on your current post.
Posted by Craig at 1:30 AM 5 comments: