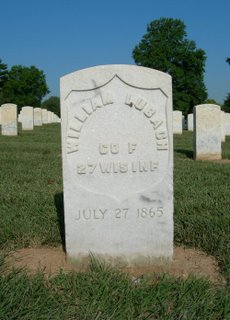 One hundred and fifty years ago my great great grandfather left his home in East Brandenburg and brought his wife and two small sons on a ship to a new life in the new world in a farming community near Sheboygan in the state of Wisconsin. Less than ten years later he was buried at Jefferson Barracks in St. Louis. He was thirty-eight years old when he fought and died in the American Civil War.

A week ago I visited a website called Random Acts of Genealogical Kindness. I looked up a volunteer in St. Louis who had offered to take photographs of tombstones in the Jefferson Barracks National Cemetery. I don't know much about Karen Kuhlman beyond the fact that she got back to me quickly, asked to know exactly what I wanted and then picked a beautiful day to take her pictures of my great great grandfather's grave.

I know of only one relative who has actually visited this grave. Lois Kressin, a granddaughter of my great grandfather's sister, Louise, went on a pilgrimage to St. Louis with her husband, Vernon, to see the grave. Their trip was mentioned in a letter Vernon wrote last year to his local newspaper, the Bloomer Advance. Vernon passed on a few months ago at the age of 84. The information in his letter helped to confirm my theory that his wife's grandmother was in fact my great grandfather's sister. It also demonstrated to my satisfaction that my great grandfather's wife and his sister's husband were also brother and sister. 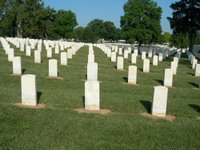 The marriages of William Lubach to Hannah Boettcher in 1879 and of Louise Lubach to Hannah's older brother, Carl Boettcher, in 1880, appear to have been an integral part of their move across the state of Wisconsin from Sheboygan County on the shore of Lake Michigan to Chippewa County near the Minnesota stateline. All four of them are buried in the Tilden Emanual Cemetery in Chippewa County.

According to my dad's older sister, Carl and Hannah's father, John Boettcher, settled in Chippewa County during the Civil War. I suspect that the two families may have met crossing the Atlantic aboard the same ship. 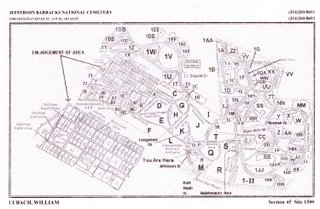