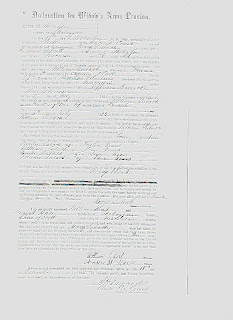 Back in December I filled out some forms and mailed off a record request to the National Archives and Records Administration in Washington D.C., better known as NARA. I requested military service and pension application records for three soldiers from Wisconsin, my great great grandfather, William Lubach, his wife's brother, William Ebert, and the husband of his wife's sister, August Heise.

The records arrived in early February. I included a note in my request indicating that I thought the three soldiers were brothers-in-law, related to each other by marriage. The records don't mention specifically that they were brothers-in-law, but they might as well have, as it's clear from other records that they were. The pension application serves to verify my conclusions drawn from those other records.

When my great great grandfather failed to return from the war, his widow, Maria, applied for a pension. She had to prove that she was, in fact, married to my great great grandfather and that the four minor dependents she listed were, in fact, his children. On December 18th, 1865, she presented as witnesses for these facts William Ebert and August Heise who swore "that they have known the parties above described to have lived together as husband and wife for ten years previous to and up to the time of deceased going into the aforesaid service of the United States, and that they have every reason to believe, from the appearance of the applicant, and their acquaintance with her, that she is the identical person she represents herself to be, and that they have no interest in the prosecution of this claim." Their names are signed below the cited legal verbiage.

My great great grandparents, William and Maria Lubach, were married "in the Kingdom of Prussia on the 6th day of July, 1852;" but beyond four children, it's not clear if she had any other evidence to present that this was in fact the case. Her pension application was never acted upon. On March 15, 1866, she had to file another form, a Widow's Claim for Pension in addition to the Declaration for Widow's Army Pension that she had filed three months earlier.

On this form the date of her marriage to William Lubach has changed from "the 6th day of July, 1852" to "the 6th day of June, 1852" and she also specifies that the wedding took place "at Zehden in Prussia" and that it was performed "by one Rev. Meletz, a Minister of the Gospel;" and that "her name before her marriage was Maria Ebert." She also deposed "that she believes there is a public record, in the above mentioned place, of her marriage, but the same can only be obtained at considerable expense and delay and offers herewith the testimony of two disinterested witnesses to said marriage."

This form isn't signed by William Ebert and August Heise, but it would seem likely that if William Ebert was her brother and August Heise was married to her sister, Sophie, they would probably have been in attendance on the occasion of her wedding. If her statement does not refer to them, it could perhaps refer to her parents, Wilhelm and Dorothea M. Ebert, her next door neighbors in Scott Township and the parents of her brothers, William and August. I think it might be difficult to maintain, as she did, that her brother, William Ebert, and her sister's husband, August Heise, were "disinterested witnesses to said marriage." The wedding might have been boring and it might have been difficult to recall fifteen years later if it took place in June or July, but 'disinterest' doesn't really apply when a federal pension is riding on what you remember about your sister's or your wife's sister's wedding.

Maria Lubach was apparently never granted a widow's pension, but she did remarry and her second husband, Ludwig or Lewis Backhaus, filed a Declaration of Minor Children for Pension on the 19th of May, 1868. Maria married her neighbor, Lewis Backhaus on January 20, 1867, and by virtue of that marriage and his Declaration he became guardian of her pensionable children. Maria's marriage to William Lubach in Prussia was recognized in the declaration Lewis Backhaus made requesting a pension for his wards. The pension was apparently paid at the rate of $10 monthly until February 13, 1879, which nearly coincides with the date of my great grandfather's marriage to Hannah Boettcher at Eagle Point in 1879.

Now the question might be reasonably asked, why is all of this so important? It isn't really, except to me. Maria listed four children, Charles, age 12, William, age 10, Louise, age 7, and Edward, age 3, on her declaration for a widow's pension. My webpage , written three years ago, presents the status of these children as an abiding mystery. The State of Wisconsin conducted a census in 1865 in which William and Maria Lubach were listed as the parents of three children, with ages and gender corresponding to Charles, William and Louise, in agreement with the 1860 federal census. Edward appears, at least on paper, to have been part of the Backhaus household.

In 1860 Ludwig Backhaus was married to a woman named Henrietta with most of their children fully grown or in their teens. I don't know what happened to Henrietta, but my suspicion has long been that she may have died giving birth to Edward. And I suspect that with Henrietta's death, Maria may have stepped in and raised Edward as though he were her own.

So when William failed to return from the Civil War, it was a fairly natural progression to marry the father of a son she had already essentially adopted, despite the substantial difference in their ages. And it appears that Maria gave birth to another son by Ludwig Backhaus in 1868, so the marriage was not simply a matter of pensionable federal record keeping.

I wrote a post about two years ago concerning William Ebert, who served in the 12th Wisconsin and was wounded in the Battle of Atlanta. I mentioned then that I did not know if this William Ebert was in fact the younger brother of my great great grandmother, but that I considered it a distinct possibility. The records received from NARA greatly enhance the probability of that supposition. William was shot in the upper portion of his left arm and spent the major portion of his military career recuperating from that wound in a military hospital.
Posted by Craig at 7:21 PM 2 comments: