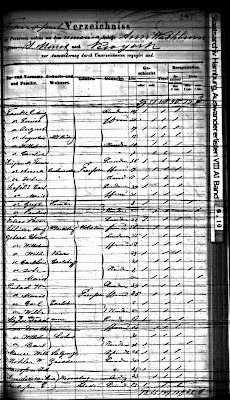 I joined a newsserver called the Germany Passengers List about a year ago. The members of the list often go to great lengths to assist people looking for information about ancestors or relatives who emigrated by ship from what is now called Germany to other parts of the world.

A month or so ago the list ran a message from someone with a relative who made the crossing from Hamburg to New York on the Ann Washburn in the summer of 1856. The listowner, Ursula Adamson, replied to that message, indicating she has access to microfilm records of the Hamburg passenger manifest for that voyage. I sent a message to the list indicating that my ancestors were also aboard that ship. A week or so later I got an e-mail from the listowner with a record attached, a microfilm copy of the page on that manifest where my ancestors are listed.

If you click your mouse once on the manifest image above you can see the image in its actual size. And if you scroll to the bottom you can see that my great grandfather, Wilhelm, age 0, is listed on the 10th line from the bottom, directly below his brother Carl, age 2, his mother Marie, age 26, and his father Wilhelm, age 29.

After the Name column and before the Age (Alter) column there are three other columns, Geburts oder Wohnort (Birth or Home Village), Landes (Country), and Gewerbe (Occupation). In 1856 Landes referred to whichever of the many hundreds of small kingdoms, duchies and principalities that were eventually unified as Germany. An attempt had been made in 1848 to unite all of the many small kingdoms under the banner of a German state, but that effort failed. Greater Germany as a nation-state wasn't realized until 1871.

No birth or home village is listed for Wilhelm and Marie, but there is a locality listed for Carl. The handwriting isn't easy to decipher and it is in German, but it looks to me like what is written could be the name Carlsheim. I haven't been able to locate any villages by that name online, but I have found a literary reference.

Benedikte Naubert was a popular author in Leipzig at the beginning of the 19th century. She wrote more than fifty books, some of them fairy tales later adapted by the Brothers Grimm. Her works included a number of historical romances, some of which were translated into English by Matthew (Monk) Lewis shortly after their publication in German. One of those romance novels was entitled Feudal Tyrants: The Counts of Carlsheim and Sargans. The story was set near Zurich in Switzerland, probably so it wouldn't be confused with any actual places in what eventually became Germany.

I don't know if the emigration officials in Hamburg had a policy about passengers listing fictitious places for their points of origin. I suspect it was permissable if it came from a book they hadn't read. Marie listed what looks like Greufsen for her country. I've located a small town in Thuringia by that name, although now it seems to be spelled Greussen. Until fairly recently Thuringia was part of the former East Germany. The town is about 30 miles north of Erfurt and fifty miles west of Leipzig. Frederick von Hardenburg's poem Novalis seems to be associated in some way with this locality.

I haven't had much luck deciphering what Wilhelm and Marie listed for their occupations. I'm willing to entertain educated guesses.
Posted by Craig at 6:03 AM 9 comments: