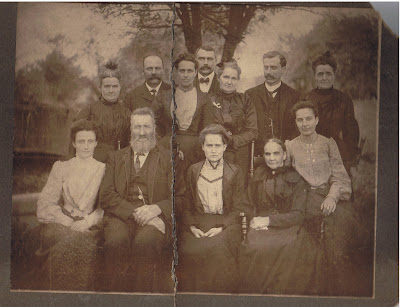 Descendants of any of the people pictured in the photo above are cordially invited to attend a family reunion hosted by my third cousin, Kim, in California. Actually she wants to have the reunion in North Liberty Township in South Bend, Indiana, where the picture was taken more than a hundred years ago. My mother was born and raised in South Bend. She bore a striking resemblance to her grandmother.

A firm date has not yet been set, and the venue is still up for grabs. I alone have two aunts, three sisters, two brothers, two nephews, two nieces and eleven first cousins, all of whom are eligible to attend. I'm sure Kim must have at least that many, as well, and she tells me she's contacted at least one other cousin.

The elderly couple seated in the rocking chairs are Alexander H. and Lydia Anne Price. My great grandmother, Laura (Price) Steele, the youngest of their ten children, is seated between them. Her youngest sisters, Manerva Hively and Emeline Gushwa, are seated in front beside Alexander and Lydia Anne. Standing behind them left to right are Mary Freeman, Lorenzo Price, Angeline Knepp, Albert Price, Margaret Krieger, Frank Price and Elzira Klopfer. Elzira was my cousin Kim's great grandmother.

Alexander and Lydia Anne moved to South Bend from Ohio in 1864 during the American Civil War. Frank was the first of the children born in Indiana. The first five were all born in Ohio during or before the war. An obituary for Alexander indicates that Alexander and Lydia Anne belonged to a church that was part of what was called the Evangelical Association. He and his family apparently lived in what was called the Preacher's House. My great grandfather, Ira Steele, Laura's husband, was ordained as an Evangelical minister in 1909, ten years after my grandfather was born.

Nathan Cordray served as the enumerator of the 1860 Census for the five townships in Coshocton County along the Tuscarawas River. His job was to count all of the white people living in those townships.
Posted by Craig at 3:48 AM 8 comments: