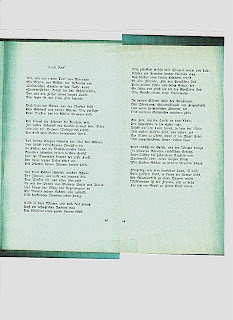 As far as I know, Konrad Krez only published three poems about his experiences commanding a Union regiment in the Civil War. None of those poems, to my knowledge, have been translated into English except on this blog.

Unlike 'New Orleans, February 1865' and 'Heimchen Brazos Santiago', written about locales where his unit was stationed for only a week or two, 'Little Rock' is about the place where he and his men were assigned for a year and a half, fully half of the three years that the 27th Wisconsin was involved in the war.

My great great grandfather, as a replacement troop, joined up with the regiment at the end of January, 1865, a few days before the unit was transferred by boat to Mobile by way of New Orleans.

Where, as from the emerald gates
A stream of silver, the Arkansas
From forested hills down into the flat land
Flows, and you crown the plain,
The river's long course from far distant
Rocks spills at last its flood.

Beloved of the South, the North
Kisses the sweat from your brow;
Underground springs that never run dry
Replenish your cool waters.

February brings you its buds,
Leaves in full array decorate your March,
And with the flowers' fragrance filling
The air, your blossoms bring in April.

On far away mountains the snow in May melts,
Delivering refreshing floods to your feet
To soften your summer nights.
Storms douse your hot autumn,
And in November the first frost comes
To kill your last roses
And the leaves on your trees turn colors.

Your eaves shiver with the light snow
In January, often coating your ponds
With thin ice, and more often,
Ornamenting your trees with icicles,
That hang with the rainbow's splendor
From your pine needles, covering
Every bough with glittering jewels.

Mild is your winter, and indeed cold enough,
That with the comfort of a chimney
One enjoys the warmth of a good fire.

How fortuitously mixed your heaven of warm and cold!
In which a foreigner, coming from hot
Or cold lands, always encounters old friends,
For your Germans are your wild vines,
And your oaks, as lovely and large
As those of the Spessarts, are like
A piece of his old Fatherland.

In your garden an apple tree stands
Beside pear, plum and fig plants,
And all of the familiar flowers
That with our species go wandering.

A rock, like the Lorelei on the Rhine,
Nearby to you in your highlands,
Looks out over the plain, where your corn's
Full cobs grow higher than
A man on horseback, standing in his stirrups,
Can reach with his outstretched arms.

There grows the barley and there the rye
In heavy sheaves, richly turned out;
There fly the bursting shells of cotton about,
Where the white fleece, like balls of snow,
Hangs from green stalks.

Generous, as your fertile soil,
Are your hospitable people,
Who know no poverty
And make thrift their virtue.
Welcome is the foreigner, for whom
A ready chair is found at every table.
Posted by Craig at 3:26 AM 2 comments:

I finished high school, quite a few years ago, in Galveston, Texas, and started college in Houston. One of my first college reading assignments was a book called 'Invisible Man'. It was for a course called Existential Literature or something along that line. We read Malraux, Sartre, Camus, Beckett and a few others as well. I have fairly distinct recollections of most of those writers, but I think Ralph Ellison's first novel was probably the most challenging and eye-opening work in that lot. Perhaps it was because I was attending school in inner city Houston and exposed for the first time in my life to a community in which people of color were the norm and not just a novelty.

I remember reading about Ellison's death a few years ago and noting that a long awaited second novel called 'Juneteenth' was expected to be published posthumously. I haven't latched onto a copy of it yet, but I'm sure I will as it was finally published about two years ago and the preface in that edition was written by a professor, Charles Johnson, in whose graduate seminar I was a student. I'll buy the book on that account alone.

It's only in reading about Ellison's second novel online that I've become aware of the title's historical significance. Juneteenth refers to June 19, 1865, the day on which the promise of the Emancipation Proclamation was officially fulfilled once the outcome of the Civil War had been determined. It's a black or African-American holiday that was first celebrated on that date in Galveston when Union forces took possession of that city a few weeks after the war had officially ended. Texas was the last of the Confederate States of America to reenter the Union.

I mention it here because it's only quite recently that I've been able to determine where my great great grandfather was on that date. I still don't know precisely where he was, but I feel as though I've got it pretty well narrowed down. On June 6, 1865, he disembarked at Brazos Santiago from a ship called the Clinton with quite a few other Union soldiers who had steamed there in less than a week from Mobile, Alabama. He was hospitalized on June 8, 1865. His unit, the 27th Wisconsin Volunteer Infantry Regiment, marched from the island of Brazos Santiago to a camp on the Texas mainland north of the Rio Grande near a small town called Clarksville on the 13th. Their unit was part of a quite substantial force that was sent to take possession of Brownsville which they did in the first week of August.

A handful of soldiers in Galveston on June 19th, declaring themselves in charge of Texas, is one thing. A whole lot of soldiers, several brigades if not an entire division or two, occupying Brownsville on August 8th, is another. Brownsville was where whole shiploads of cotton came into the hands of British, French, Spanish and German merchants. Cotton was king in the Confederate States of America. And as long as the cotton grown in Texas, Arkansas, Louisiana, Mississippi and Alabama could be safely transported to Brownsville, the Confederate States of America were economically viable. That trade ended, not on June 19, but in August when Union forces took control of that city. Officially, the war ended in May, but the fat lady didn't actually sing until the first week of August.

It's not yet clear on what day my great great grandfather arrived at the hospital at Jefferson Barracks in St. Louis, but I would guess that arrangements were made for his transport when it became clear that he was not fit for the march to Clarksville on the 13th. I doubt that he would have been sent off before that date as it would have been hoped that he might recuperate enough to make the march and stay with his unit. Hospital beds would have been needed for other units arriving as part of the buildup for the march on Brownsville, so I would guess he was put on a ship within two or three days or a week at most after his unit had moved out. On June 19th he was probably on a ship on the Gulf of Mexico headed north to the mouth of the Mississippi.

My great great grandfather died of pneumonia in the hospital at Jefferson Barracks on July 27, 1865, and is buried in the National Cemetery there. He was a Prussian. He may have learned a little English during his ten years as an immigrant, but probably not very much. Roughly a third of the men in his regiment spoke German, but one of them was his commanding officer, Brigadier General Konrad Krez. Throughout most of the war Colonel Krez took his orders from another German, Adolph Engelman, and Engelman got his orders from a Prussian, Frederick Salomon, a brother of the then acting governor of Wisconsin, Edward Salomon. These were men who had formal military training as officers in an army that had bested Napoleon at the Battle of Mockern somewhat prior to his encounter with Wellington at Waterloo.

I lived on the Texas gulf coast for about four years. Mostly those years seem like a short vacation from the rest of my life, but there are times when my sojourn in the southlands does seem to have played a role in shaping my identity. My recollection is that, at least in the summer, the Gulf stream water was even warmer than the Sulu Sea. Happy Juneteenth.
Posted by Craig at 2:34 AM No comments: