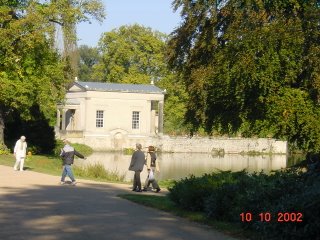 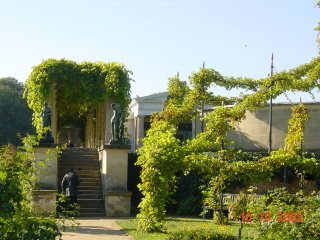 I visited Germany several years ago and spent the better part of a day in Potsdam after a short train ride from Berlin and a much longer walk than I had anticipated. I got off the train one stop too early and walked for about an hour and a half or more, across a bridge and along a river, in what I thought must be the general direction of the Schloss Sanssouci. It took a while, but I found it, although I entered the park at a point that was nearly as far as you could get from the main buildings. I had only taken a few pictures when the battery light started flashing. If I had known what to expect I would have made sure the battery was fully charged. The pictures I did get were of some smaller buildings that were put up to house, protect and display some of the ancient Roman ruins on the park grounds. If you click your mouse on the pictures once or twice, the buildings I did shoot get quite a bit bigger.
Posted by Craig at 5:44 AM No comments: