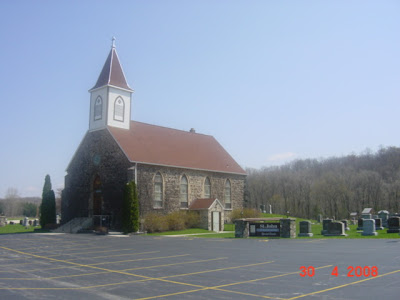 I don't know how many state parks come furnished with a house of worship that's an authentic national landmark, but I do know that the Northern Unit of the Kettle Moraine State Forest in Wisconsin has one for which I feel a certain affinity. Ordinarily my tendency is to worship nature out of doors and some of the best places for doing so can be found in state or national parks. The church in the picture, St. John's New Fane Lutheran, was built in 1872. The surrounding countryside wasn't made a state park until 1936. 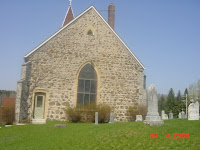 A few weeks ago I just happened to be in the neighborhood, so I made a point of stopping in for a brief photo op. My wife and I were in Milwaukee in April to visit my mother-in-law who celebrated her 87th birthday on Mother's Day. She loves to drive her Dodge Caravan, so not much persuasion was required for a quick run up the freeway to Kewaskum and a little beyond. Last year I wrote a post indicating that I'd located a cemetery transcription online that placed several of my ancestors in the New Fane churchyard cemetery. 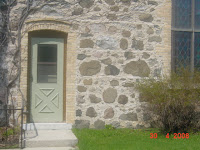 The church is apparently a national landmark due to the mode of its construction. It's what's known as a "gothic fieldstone" church. Many hundreds of them were built in the 19th century, but only a handful are still standing and in use. The soil of the Kettle Moraine is notoriously rocky because it marked the leading edge of a huge glacier that began retreating at the end of the latest ice age. German immigrant farmers like my ancestors, who settled in Wisconsin in 1856, had to first remove the stones from their fields in order to cultivate them. 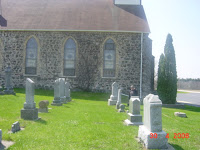 My understanding is that the stained glass windows, four on each side and one at the back, were added at a much later date, probably well into the 20th century. My mother-in-law kept the engine revved while my wife and I did a quick survey of the cemetery. We found quite a few markers written in German, some that must have been from before the end of the 19th century, but none of them had legible inscriptions, so we weren't able to locate the graves of my great great grandmother, who died in 1893, or my great great great grandfather, who died in 1872. 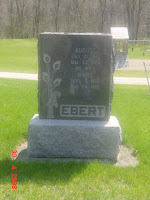 But we did find the grave marker for someone I think was my great great grandmother's youngest brother. August Ebert died in 1924 at the age of 78. His wife, Mary, passed on at the ripe old age of 39. August had a brother two years older, William, who was just old enough to enlist in the Union army in 1864. William served only a few months before he was wounded at the Battle of Atlanta. He collected a Civil War disability pension for 50 years and died in 1916. William's pension records furnished the clue that led me to New Fane. He married his wife, Fredericke, at St. John's New Fane in 1866, six years before enough field stones had been collected to actually build the church. His older sister, Maria, married her second husband there in 1867. Her first husband, my great great grandfather, Wilhelm Lubach, died at Jefferson Barracks Hospital in St. Louis in July, 1865, while serving in the 27th Wisconsin Volunteer Infantry. 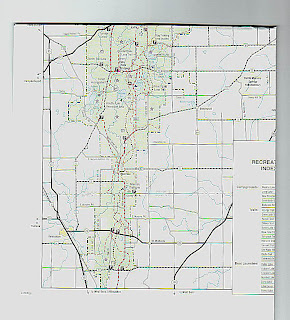 I've scanned in part of a map of the Kettle Moraine State Forest for any readers interested in making the trek to New Fane. The town itself has only one street but many of the houses along it are fairly new. I suspect that the State Park imposes a few zoning restrictions on development, so the town probably won't get much bigger than it is right now. The Bridle Path runs a block west of the only street in town. One block to the east is where hikers pass through along the Ice Age National Scenic Trail. The town of Kewaskum can be seen in the lower left corner of the map about three miles southwest of New Fane. It has a number of excellent cafes and handy stores for loading up knapsacks for the thirty mile hike from one end of the forest to the other. I'm fairly sure that the land my ancestors homesteaded for most of the second half of the 19th century is situated a little more than a mile northeast of New Fane, near the junction of Brazelton Drive and Forest View Road. One click of the mouse on any of the pictures will enlarge the view.
Posted by Craig at 1:38 AM 1 comment: