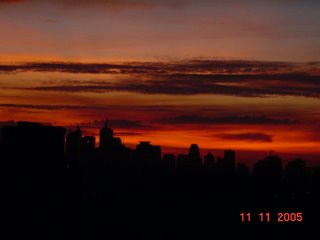 These are a few snapshots I took a few weeks ago on a day when I got up early enough for a round of golf. The pictures were taken at about fifteen minute intervals between 5:30 and 6:00 a.m.. The view is of the Makati highrise district along the midpoint of the Epiphanios De Los Santos, more commonly known as EDSA. Click on the pictures to see enlarged versions of them.
I received several e-mails since my last post, one from a woman in Virginia with roots in Indiana who wanted permission to send copies of one of my early posts, Not Quite White, to family and friends in Indiana for Christmas. She thinks she might also have some native American ancestry from the Indiana frontier and seemed to think I must have a sense of humor.

Another e-mail was from a neighbor of someone I mentioned in a more recent post about relations and in-laws I discovered through census records and who still lives in Bloomer, Wisconsin. I plan to follow-up on that one, but I'm not yet sure how. 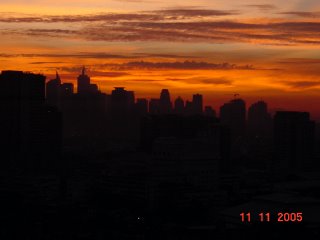 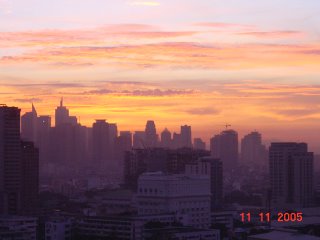 The third e-mail I got this week came in today.
It's from Lowell Schake, whose book about life on the Missouri frontier in LaCharrette Village has now been published. I'll have to keep an eye out to see if it turns up in any of the bookstores here in Manila.

When I was on home leave in Seattle several months ago I finally had an opportunity to meet the author, Andrew Ward, in person. My wife taught in the same department at the university as his wife a dozen or so years ago, so I had known about him for quite some time and had read several of his books. He told me had written another one, this time a book about an incident from the Civil War. It hadn't yet been published then, but it has now and I was able to buy it at a bookstore here in Manila last week. It's not yet out in paperback (don't hold your breath), but it's well worth the hardbound price. Ken Burns himself wrote the blurb on the back cover.

Ward anatomizes a Civil War battle fought in western Tennessee in April, 1864, known as the Fort Pillow Massacre. The book deals with the efforts of the Union army to enlist what were known then as "colored troops" after the slaves in the southern states had been freed by the Emancipation Proclamation early in 1863. I haven't yet read the whole book, so I won't try to review it here, but much of the story revolves around a Confederate cavalry general and local slave dealer, Nathan Bedford Forrest, who many people regard as the founder of the Ku Klux Klan. The reputation he developed and the methods he employed in that massacre do much to explain how the Klan came into being and has managed to persist for nearly a century and a half.

The book is particularly interesting to me because my German immigrant great great grandfather served with the 27th Wisconsin Infantry, a unit that spent most of the war in Arkansas, directly across the Mississippi River from Fort Pillow. My ancestor didn't join the unit until early 1865 as a replacement troop. He was in Arkansas for only a few days or perhaps a week or two at most before the unit went downriver to New Orleans in preparation for the siege of Mobile, but the men of his regiment had spent the previous two years in circumstances almost identical to those painstakingly described in Ward's book.

A primary mission for the Department of Arkansas under General Frederick Steele was to recruit, organize and train "colored troops" from among the many freed slaves in Arkansas. When the forts fell in Mobile in April, 1865, the fortifications there were breached by "colored troops" while my great great grandfather's unit and many others were held back in reserve.
Posted by Craig at 7:12 PM No comments:

When I was about six years old my family drove from Kansas to South Bend, Indiana, for a summertime visit to my mother's family. Bud and Carlie Steele were the only grandparents I ever knew, as my dad's parents in Wisconsin had passed on before I was born.

The year was 1959. It was the last time the White Sox went to the World Series until just last month. My dad was a big Sox fan then, as my folks had gone to college in Chicago about ten years earlier. At age 6 I was already a Yankee fan, which my dad considered heretical. But in those days, televised baseball consisted of the Yankee powerhouse and whatever collection of bums they happened to be playing that Saturday. Dizzy Dean and PeeWee Reese provided color commentary and play-by-play every week. The Yankees had Mantle and Maris in the outfield, Kubek and Richardson up the middle, Boyer and Skowron at the corners and the battery of old Whitey Ford and Don Larsen throwing the pill to old Yogi Berra, backed up by the young rookies, Mel Stottlemyer throwing to Elston Howard.

I met my great grandparents on that trip, Ira and Stella Ruth. They were about eighty-five years old then and living independently in a three-story rooming house that my great grandfather had built back when automobiles were still a novelty item. I remember lots of wooden stairs and a living room with countless porcelain knickknacks and my mother was quite concerned that I might break some of them if I wasn't careful. My great grandparents walked with canes; they didn't hear well and their memories were going. My great grandfather had developed a habit of going out for morning walks and getting lost on his way back home and this was mostly what my mother and her mother talked about while my sisters and I eyeballed the antiques we were enjoined from damaging.

My mother passed on about six years ago and her mother died ten years before that in 1990 at the age of 90. I never really learned much from them about the Ruths except that it seemed they had always lived in South Bend, although in fact I don't think they moved there until after the turn of the century. Since joining Ancestry.com and gaining access to the census records a few weeks ago, I've already learned more than my mother or my grandmother ever told me about them. I really had no idea what their history was.

My grandmother's father, Ira Ruth, was living in LaGrange County in Indiana in 1900, which is about thirty miles east of South Bend. He and Stella and their first child, Carlie, my grandmother, lived in Van Buren Township practically on the stateline between Indiana and Michigan. My great grandmother was listed as Mary Ruth in 1910 and in 1920, but in 1900 she called herself Stella. She was born in Indiana. Her husband, Ira, called himself a farmer then. My grandmother was a newborn infant, one month old, in 1900. The family moved to South Bend between 1900 and 1910 and moved again to the 7th Ward in Portage Township in downtown South Bend between 1910 and 1920. By then Ira called himself a carpenter and I suspect he had already built the three-story boarding house I visited in 1959.

Before 1900, Ira Ruth had lived in Michigan where he was born in 1874. His parents were Augustus and Sarah (Andre?) Ruth. They were apparently both born in Lower Mt. Bethel Township in Northampton County in Pennsylvania, very close to the New Jersey stateline, about ten miles north of Easton, PA.. Augustus Ruth was the son of John Ruth, a wheelwright in Northampton County, Pennsylvania, who was born in 1817. John and Anna Ruth moved to Michigan with their sons Michael and Augustus in 1867 and the family lived in Park Township in St. Joseph County, Michigan, where they were listed as farmers in 1870.

Augustus and Sarah (Andre) Ruth were married in Michigan shortly after 1870. Both of their families had lived in eastern Pennsylvania for perhaps more than a hundred years in a predominately Swiss-German community that had settled there when the land was still occupied by Delaware Indians. The arrival of Germans in the 1750s had helped to precipitate the French and Indian War. I don't yet have a name for John Ruth's father or grandfather, but his milieu suggests that his ancestors were part of the same wave of immigration that brought my grandfather's family, the Steeles, to Pennsylvania in the 1750s.

My understanding is that the baseball player, George Herman Ruth, was born in Baltimore, Maryland in 1895 and raised in an orphanage, according to a biography that I read many years ago, written by the late great sportswriter, Bob Considine. He seems to have been named after his father who was also a George Herman Ruth, but beyond that not much is known about the Bambino's ancestry. Baltimore is certainly close enough to Philadelphia that it is possible for the Babe to have been a distant relative. His father would have been born shortly after the Civil War, just at the point when my ancestors were moving west to Lake Michigan.
Posted by Craig at 6:28 PM No comments: