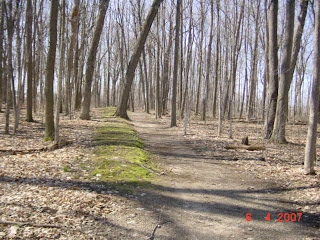 I had a chance to visit a county park near Milwaukee last month. It had actually been a state park in Wisconsin for a number of years until just a few years ago. The temperature was below freezing, but it was still a real nice day for a walk in the woods.

My wife and I were visiting my mother-in-law who lives in Milwaukee. She's 86 years old, also of German stock, and quite accustomed to cold weather, but she stayed in the car while we took our stroll and snapped a few pictures.

Lizard Mounds is several miles north of West Bend in Washington County, and about ten or twelve miles south of the area where three generations of my dad's family lived for about two decades when they first arrived in America from Prussia, shortly before, during and after the American Civil War. The mounds were built as a burial ground by Native Americans around the time that King Arthur and the knights of his Round Table were conquering the southern portion of England. Most of the mounds were plowed up and turned into farmland by the early settlers in the 1850s, among them my ancestors, but a few of the mounds still remain, preserved in the Lizard Mounds park. It's called Lizard Mounds because many of the mounds were originally designed to resemble lizards, birds and other clan oriented creatures. 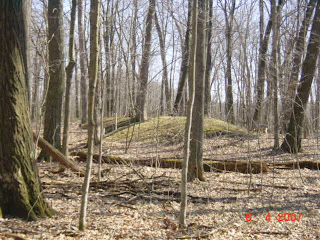 Six years ago my wife and I and her brother and his wife to be took my mother-in-law to Mackinac Island in Michigan to celebrate her 80th birthday. We had a great time there. Later that year, about a month after the collapse of the World Trade Center towers, my wife and I went to Lynchburg, Virginia to visit some friends, the couple who introduced me to my wife. We went to Lynchburg by way of Atlanta because my wife had a meeting to attend there. We flew to Atlanta, then drove to Lynchburg and back by way of South Carolina and North Carolina, the same states, if not exactly the same route taken by General Sherman on his March to the Sea.

While in Atlanta we visited the Stone Mountain monument, Dixie's Mt. Rushmore. Six years ago it had never really occurred to me to even wonder if I might have a Civil War ancestor. But visiting the monument turned out to be an awakening for me. It wasn't until more than a year later that I first found my great great grandfather's name on an online regimental roster. And it took two more years before I became fully convinced that the name on that roster actully was my great great grandfather. Two world wars waged against Germany served quite effectively to remind Americans of German descent to remember to forget that their ancestors took any part in that conflict. Part of it is because the biggest wave of German immigration took place after the Civil War. 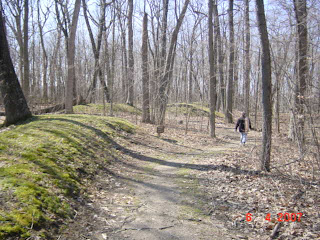 It would never have occurred to me that one of my relatives took part in and was, in fact, wounded in the Battle of Atlanta on the bloodiest single day of that campaign. My great great grandmother's younger brother enlisted with the 12th Wisconsin Volunteer Infantry Regiment in February, 1864. Two months later he marched from the Tennessee River across northern Alabama into Georgia and on July 21st he was shot in the left arm during the Battle of Leggett's Hill, also known as the Battle of Bald Hill. He was sent back to Wisconsin and convalesced in a military hospital in Madison, Wisconsin until he was discharged in January, 1865.

Up until then my father's family had been relatively untouched by the war. They appear to have taken no part in the first three years of the war at all and by 1864 most of the bloodiest battles had already been fought. After Atlanta fell it was clear that the southern states had lost militarily and the only question was how much longer it would take to compel their capitulation. 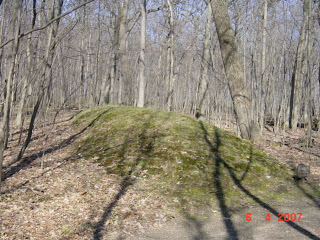 My great great grandfather and the husband of his wife's sister both enlisted in October, 1864. It's not clear how much pressure was applied to get them to enlist, but my guess is that if they hadn't they would have been drafted. Draftees were not much different than prisoners of war except that prisoners of war weren't subject to that much forced labor. Both men were close to forty years old and had large families to feed. They joined their regiment, the 27th Wisconsin Volunteer Infantry, in Little Rock, Arkansas in late January a few days before the unit was sent down the Mississippi to New Orleans, Mobile and later to Brownsville, Texas.

My great great grandfather's brother-in-law fell ill with dysentery before the unit reached Mobile. He was sent back to Wisconsin and remained in a military hospital in Madison, Wisconsin with chronic diarrhea for the next six months until he was discharged in August, 1865. He never re-joined his unit, which mustered out in Brownsville. He collected a monthly disability pension for his chronic diarrhea after the war. My great great grandfather took part in the Battle of Spanish Fort in early April, 1865, but fell ill on the ship when his unit was sent to Texas in early June. He was hospitalized at Brazos Santiago at the mouth of the Rio Grande and transferred to a hospital at Jefferson Barracks in St. Louis where he died of pneumonia at the end of July. His wife re-married two years after the war. 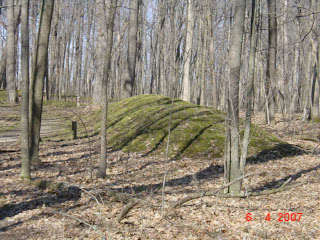 While my wife and I were in Atlanta six years ago we visited one of my wife's colleagues, a woman who teaches at one of the schools my wife attended nearly thirty years ago. Her colleague lives in a sub-division on the east side of Atlanta. The house is in walking distance of Leggett's Hill, and the spot where my great great grandmother's brother took a bullet in the arm for the Union cause.
Posted by Craig at 5:03 AM No comments: